So, this amazing thing is happening with these read alouds that I’ve promised myself (and my students) that I’m doing every single day. When finished, I place them in the front of my room … and my kids are reading them … a lot! We are 8 books into my new venture and I’m thrilled at the number of amazing words my students have heard, great mentor text they’ve seen, and the connections they are making already. They love this part of our day!

So … here are the five books I read aloud to my students this week: 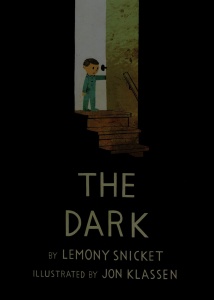 #1 The Dark by Lemony Snicket

Sure, my kids have all heard of The Series of Unfortunate Events and many have already watched the series on Netflix. I told them I’m holding off on that until I read all of the books. But they didn’t know that there are several more Lemony Snicket books available in our very own Media Center!

After reading about the Creepy Underwear last week and unsettled Jasper when it comes to the dark, my kids were expecting something a little more ominous than what they found in this book. In this book, Laszlo isn’t really a fan of the dark, but he learns that the dark isn’t all that bad and scary. The most interesting thing that my kids took away from this book was how the dark was an actual character who interacted with the little boy, Laszlo. They didn’t realize that something so abstract as dark could be used in that role.

This is another unusual book that gives kids exposure to a different type of text format. This book’s story is structured around 13 unique words. The story builds bit-by-bit and creates a world where these unique words/ideas all fit together in a way that just works. It’s silly. It’s odd. And it’s fun.

After reading this, I wrote 13 strange words on the board and some of my extremely motivated writers are working on their own version of 13 Words to see if they can build a cohesive world like in the original book.

Ok, who doesn’t like some superhero adventures once in a while?

This book starts with the child, Bruce Wayne, and briefly describes how he gained his courage & motivation to fight evil in the world. As a kid, he was faced with a monster in a dark cave and had a choice to make. He found the power to say, “No!” and to stand strong, which inspired him to do more to help others. It’s short, beautifully illustrated, and reminds children that even though they are young, they can still be brave. 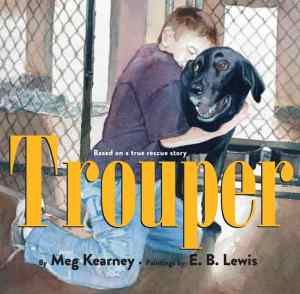 Watching all of the posts from the animal shelters that have worked tirelessly to help the displaced animals from the hurricanes made me think of this story. Trouper is a homeless dog that gets picked up by animal control and brought to the shelter. He watches the other dogs get adopted one-by-one, but he remains. That is until a young boy sees something special in him and brings him home. He learns what it means to be a part of a family, to have food, and a soft bed. And even though he only leaves three footprints in the snow, he’s still worthy of love. 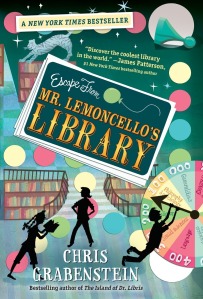 No, I didn’t read this whole book to my class this week. Instead, I totally hooked them because once we return from break, we’re starting this as yet another read aloud. This is partly because I love this book and it’s so much fun, but also in preparation for a Skype chat we’ll get to do with the author later in the year (cross your fingers & toes for us).

So, to get the kids really excited, we read the first chapter in class and I left them on a cliffhanger before a week long break. Bwahahaha!